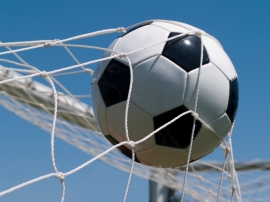 Do your kids know what a goal is? Or do they think it’s what occurs when somebody scores in soccer?

Recently, I’ve been listening to a motivational/inspirational speaker named Zig Ziglar. Zig has an amazing audio book called Goals, which I highly recommend.

Listening to the CD’s, I got to thinking about my boys. Have I been teaching them about goals?

For some reason, probably because they’re both so bright, I assumed they already knew what a goal was.

When I asked them about it and got the, “it’s when somebody scores in soccer dad” response, I realized that I had not been teaching them — at least not in a direct way. We work on goals all the time, but I had never given them the language to understand what it was we were doing.

They needed a kid-friendly definition of the word and the concept. And they needed it now so that goal setting (and attainment) could become a core value and a way of life.

Although I’ve been “setting goals” for many years, until recently I have not written them down or defined them clearly — so they were always in a cloudy, “gaseous” state. Since they were not clearly defined, I didn’t have a tangible idea of how I would attain them, which made it impossible to fully commit to them. I just figured they’d manifest eventually if I did a little something for them here and there.

In other words, I didn’t really know how to set a goal. I was never taught.

Without a plan with realistic steps in it, I found that my “a little here and there,” was nowhere to be found. Without a clear intention there is no real goal to work towards. Just a lofty idea. As Zig would say, I was a “wandering generality,” and I needed to become a “meaningful specific.” He goes on to mention that even Howard Hill, the greatest archer in the world could not hit a bulls-eye while blindfolded. “How on earth could anybody hit a target they couldn’t see? …How can you hit a target (goal) you do not have?”

So, what’s the best way to teach these values to our children? Live them ourselves.

I do my best to start each day by asking myself: “what great thing am I going to do today?” This puts me in a good frame of mind to be proactive.

– Do I have milestone goals for my kids? To teach them how to ride a bike, be able to read or understand an appropriate level of spirituality by a certain age?

– Do I help my kids set “high-reaching” goals, teaching them to reach high for themselves in the process?

– Am I helping my kids set their own goals, and giving them the space to attain them? Am I supporting them (when necessary) through the process so they can come out of it having completed the goal — developing the values of integrity and perseverance?

I want to make sure that my boys know even if it’s hard, in this family we don’t give up. If this is important to you, you can get it done. I believe in you.