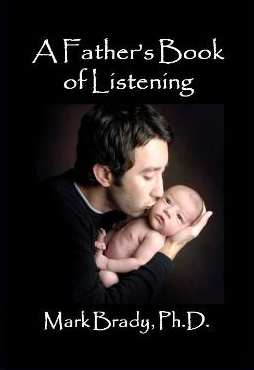 Mark Brady, Ph.D., is a dad, an award-winning author, a teacher and trainer. He has taught Systematic Training for Effective Parenting (STEP) courses for the last 12 years. Mark has also written numerous articles for journals and magazines.

A few weeks ago, Mark was kind enough to send me a couple of his parenting books to review. I immediately found them insightful, relevant and very helpful. You may have noticed I’ve been quoting him in some of my recent posts. His knowledge and experience lend a scientific aspect that I am not capable of providing on my own.

Somewhere along the way, my Idea to write a post introducing you to Mark turned into an interview on a most important subject: our kids.

And now, part 1 of the interview…

Daddy Brain: What is your definition of emotional abuse as related to yelling at kids? Does it have a tipping point, depending on frequency of yelling and duration of each yelling episode?

Mark Brady: What determines whether yelling is abuse or not is how it affects the brain and body of a child. Context is important, as is content.  If the yelling produces sustained adrenaline and cortisol levels in the child, then a case can be made for abuse.

Excessive glucocorticoid release damages neural development in two ways: it directly kills brain neurons first of all.  Secondly, the brain regularly activates a process of neural housekeeping called apoptosis. The neurons that get used the most are kept, those not used or used less often are pruned away.

If the home becomes a less than safe place because a child’s limbic system needs to constantly be hypervigilant, then whatever requires that vigilance, is contributing to abuse. Why? Because apoptosis preserves neurons in the limbic structures at the expense of developing neural structures in the prefrontal “executive-creative” areas of the brain.

Without adequate development and integration of the executive areas, children’s immune systems often become compromised along with their ability to regulate their emotions easily.  (See the story The Kindness of Children for a good explanation: http://www.committedparent.com/Kindness.html).

DB: More specifically, does yelling: “No! Stop that!” have the same damaging impact as, “What is wrong with you? Stop that!” I’m just wondering if content matters (I think it does), or is it more that yelling in-and-of-itself is the bad thing?

MB: Anything that’s shaming or humiliating can have lifelong negative impact, especially if a child remains “stuck” or still in response. You can read an account of an incident that happened to me in middle school here: The Anatomy of an Upset.

The best thing that I could have done in response to this incident would have been to stand up and say, “I don’t appreciate you attempting to humiliate me like that. I’m going to the office and ask to be transferred to another class.”  And then I should have walked out of the room.

DB: Is there a way to “undo” damage that occurs from yelling?

MB: The way to “undo” potential damage is to do whatever works to get the adrenaline and cortisol, which are necessary neurochemicals gone bad under stress, turning them into neurotoxins, out of the body. Physical movement, especially movement that has the arms and legs cross the midline of the body, like Smart Moves or Brain Gym, works especially well.

Crying is actually helpful, since tears serve an endogenic cleansing function – tears are often filled with neurochemicals. Prosody is a powerful thing that works to reduce adrenaline and cortisol, although most parents rarely have the capacity to use it effectively in the heat of a stress reaction.

DB: What advice would you give to a stressed out, exhausted parent to help them stop yelling (for arguments sake, let’s say the really want to stop yelling but are having trouble doing so)

MB: I actually give that advice here:  http://www.committedparent.com/PrimaryPracticeThree.html. The reason this is so important is because it works to effectively increase parents’ capacities to manage their own stress.

If parents work to continually add neural resources to their own network, then they have a much improved, greater capacity to manage their own life stresses and responsibilities as a parent. If they don’t do this work, they are often destined to perpetrate the sins of their own parents, particularly under stress.  😦

A few days after I received this portion of the interview (we’ve been communicating via e-mail), this happened…

DB: Unfortunately, I had a meltdown today. The kids were out of control and I didn’t deal well at all. I yelled quite a bit. Your books have helped me very much. Until today, I’ve been holding it together pretty well. But now I’m afraid I’ve damaged my boys forever. God, this is so hard…

We’re living in Wisconsin, 800 miles from everything and everybody we know. Hope you are doing better than I am right now…

MB: Sounds painfully overwhelming. And I’m sure the isolation doesn’t help. The good news is that once they’ve stopped holding your limbic system hostage, you can have a discussion with them about what made you so upset. And yes, this IS hard. That’s one of the reasons I consider this the most important job in the world. Keep breathing.

I shared this last portion of our conversation for many reasons:

(1) Just because I don’t believe in yelling doesn’t mean I am always able to stop myself from doing so.
(2) Like most dads I know, I don’t get much chance to talk about this stuff. When feelings of regret and shame remain bottled up inside, it’s just not healthy.
(3) I spoke with my boys (2 & 4 years old) the next day about what happened. I let them know what was going on for me, and why I got so upset. I related to them that there are other, more successful (less agitating) ways for them to communicate with me when they are upset, or need of something.

Not once did I blame them for my actions. It would be wrong to guilt them because I could not control myself (no matter how unbearable their crying and screaming might have been). I also apologized for how I acted. If I want my boys to learn to be responsible for their actions, I need to be responsible for my own. And that includes admitting when I’m wrong.

When we fail, it DOES NOT mean we are bad dads. And although it’s important to accept that I am an imperfect human, I also accept that anything is possible. I can change. I can improve. I can stop the cycles of behavior and thoughts that cause myself and my family pain.

You can find many of Mark’s books, including this one, through Amazon.com, Paideia Press (414-828-6275, paideia@gmail.com), or many fine online book retailers.