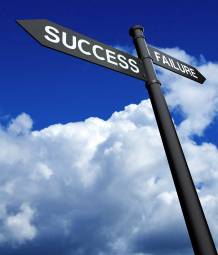 Did you know that Michael Jordan was cut from his high school basketball team? Following this rejection he went home, locked himself in his room and cried.

Walt Disney was fired from a newspaper for having no imagination and no original ideas.

Even The Beatles failed. Before they became “popular,” they were turned down by Decca Records who claimed, “we don’t like their sound, and guitar music is on the way out.”

One of Thomas Edison’s teachers told him he was “too stupid to learn anything, and that he should go into a field where he might succeed by virtue of his pleasant personality.”

What would have happened if these people would have listened to the criticism?

Whether the criticism spurred them to greatness or not, one thing is for sure: the deciding factor in their success was not their talent. It was their ability to get back on their feet – sometimes countless times and try again.

You can do the same.
How? By learning each lesson you need to learn from your “failures,” and trying again – as many times as it takes. Do the work that needs to be done, as best you can each day. No matter how daunting. Step-by-step, day-by-day, you will get closer to your goal until it is attained.

These successful failures are perfect examples that anything is possible.

Do you listen to the critics? Are you your OWN worst critic? If so, you may be denying the world your greatness. Not to mention your family, yourself and your bank account.

You do not have to settle for less than who you are. No matter what ANYBODY says.

If Jordan had settled for less, the Knicks might have actually won a title. Scotty Pippen would have had to score a LOT more points to create the Bulls legacy. And Dennis Rodman would have fallen into obscurity instead of becoming the greatest (and weirdest) rebounder in the league.

What if Edison would have listened? We might all still be sitting in the dark.

Whether you succeed or fail is up to you. It’s your responsibility. What do you choose?

Don’t forget, your kids are watching.

4 Replies to “Get Motivated by Successful Failures (Part 1)”

Leave a Reply to Dad of Divas Cancel reply